Business partners Rodney Swil and Robert Hanepen had their names drawn in Hino Australia's 'Win Back a Truckload' competition, which concluded at the end of 2013. Swil and Hanepen are the proprietors of FPP Industries Pty Ltd, based in Seven Hills, NSW.

They purchased their Hino 300 Series 716 automatic tipper to carry out the company's daily duties as suppliers and installers of FiltaPave Sustainable Pavements.

A number of councils in the Sydney CBD and greater Sydney area have specified the product, and FiltaPave director Mr Swil said that the urban environment the truck would be operating in made choosing the 300 Series with an easy decision.

"The automatic transmission helps out a lot in Sydney's traffic, and together with the reversing camera it's a really big plus for city driving," Mr Swil said.

Another factor in the purchase was Mr Hanepen's previous experiences with the brand.

"Robert has had two Hinos before," Mr Swil said. "He bought them from Illawarra Hino and has had nothing but good experiences with the dealership and his Hinos."

Mr Swil said that winning the competition was a big surprise.

"I was elated. I've never won anything in my life so it was very good news," he said.

Hino Australia Chairman and CEO Steve Lotter said it was pleasing to see the winners of the Win Back a Truckload competition using their truck to help run an innovative business.

"Mr Swil and Mr Hanepen are representative of many Hino buyers - they are enterprising and willing to put their ideas into practice," Mr Lotter said.

"Their FiltaPave business has much in common with the Hino brand - they're not afraid to innovate, and a strong environmental awareness is displayed through their product.

"We think that they made the right choice of truck for negotiating Sydney's traffic with the 300 Series' easy-to-use automatic transmission, comfortable interior with suspension seat and Hino's advanced multimedia system.

"We're sure they will get many years of reliable, comfortable service from their Hino 300 Series, and we wish them all the best," Mr Lotter said. 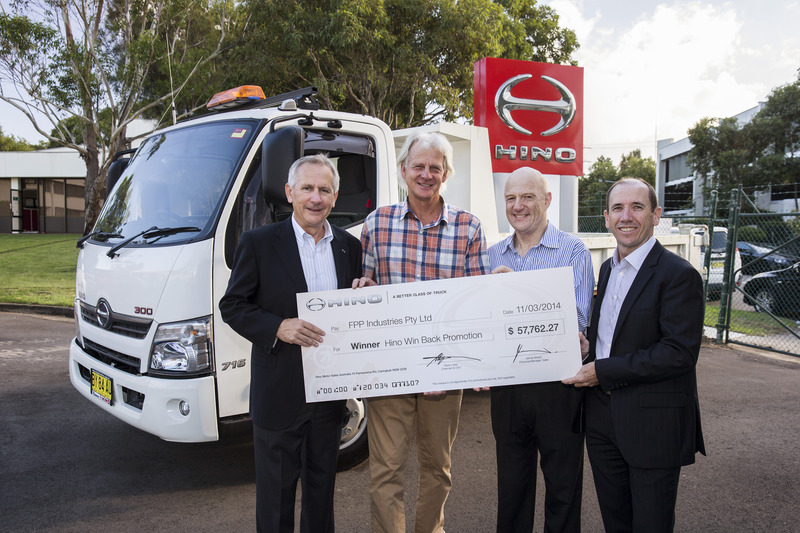