4: The number of titles up for grabs on the Dakar, in the bike, quad, car and truck categories.
10: The record number of victories on the event, held by Stephane Peterhansel with 6 titles on a bike and 4 in a car. Vladimir Chagin holds the record for victories in a single category, with 7 in the truck category.
14: The amount of day's racing on the Dakar 2013. Timed specials will be raced on each of the stages, from 5th to 19th January with 20th January devoted to a winners' ceremony in Santiago in Chile.
27: The number of countries visited by the Dakar since it was created. Peru is hosting the start for the first time, after having welcomed the race in 2012.
19, 7: The exact age in years and months of the youngest competitor at the start of the rally, Dutchman Robert Van Pelt, in the bike category.
53: The number of different nationalities present on the rally, which is a record.
73, 3, 23: The age in years, months and days of the oldest competitor in the rally, Francisco Claudio Regunaschi, in the car category.
123: The number of French competitors taking part in the race. The French are the leading nationality in terms of numbers, with 16% of the total.
190: The number of countries in which images of the Dakar will be broadcast, by 70 different broadcasters.
210: The number of organisation vehicles used every day on the rally (40 cars, 11 helicopters, 12 planes, 55 trucks, 5 buses, etc.).
400: The number of journalists who follow the entire rally, accounting for 1,800 press pass holders in the media family (technicians, consults, occasional contributors, etc.).
450: In cubic centimetres, the maximum power admissible for the engines of bikes enrolled on the rally.
745: The number of competitors enrolled for the race, counting riders, drivers, co-pilots and mechanics.
1066: The number of competitors enrolled to take part in the assistance teams.
1,200: In total, the estimated number of hours' broadcasting of images of the Dakar on the world's television channels (based on the figures for 2012).
1978: On 26th December of 1978, the start of the first edition took place, finishing in 1979.
2000: The number of message broadcasts devoted to security on 40 radio stations in Peru, Argentina and Chile.
8,574: The number of kilometres to be travelled between Lima and Santiago, with 4,146 kilometres of special stages for the bikes (and 4,155 km for the cars).
15,500: The number of equivalent tonnes of carbon emissions offset by the Dakar as part of the Madre de Dios project against deforestation, for an amount of 300,000 US dollars.
57,600: The number of followers on the official Dakar Twitter account.
601,000: The number of fans on the Dakar's official Facebook page, several days before the start of the race.
610,000: In dollars, the donation from the Dakar over a four year period to the Techo foundation, which builds emergency housing on the South American continent.
800,000: in euros, the sum devoted to Actions Dakar projects over a 10 year period, for the development of good environmental practices in the east of Senegal.
4.3 millions: The number of unique visitors to the www.dakar.com web site during the 2012 edition of the rally.
4.5 millions: The number of spectators estimated for the start, finish and passage of the Dakar in 2012, in Argentina, Chile and Peru.
294 millions: In dollars, the direct and indirect economic impacts of the Dakar in Argentina, estimated by a government commissioned study in 2012.
1 billion: The number of television viewers that saw images of the Dakar en 2012

The 2013 Dakar rally runs from January 5 to 20, 2013, and will take in Argentina, Chile and Peru. Further details can be found at www.dakar.com 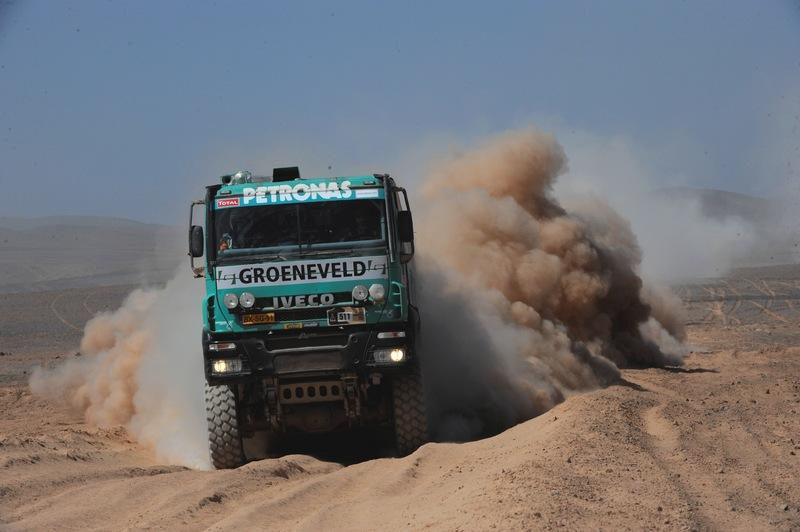