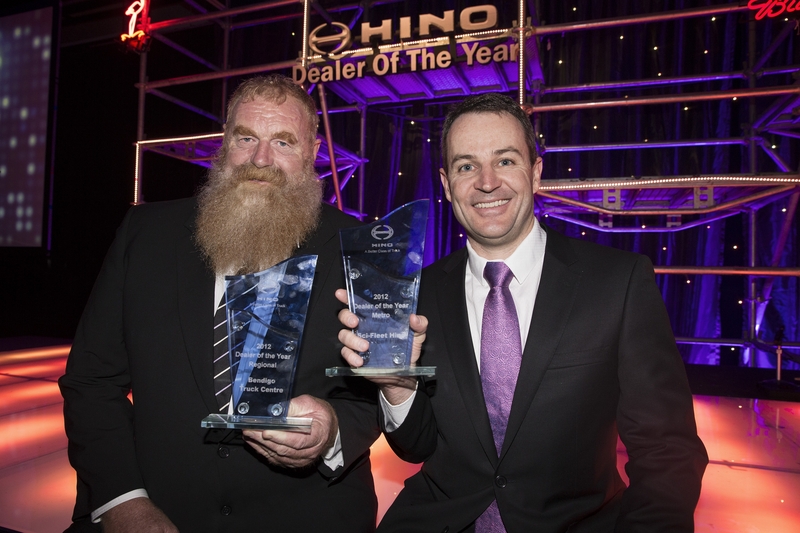 Each dealership took out the same title in 2011, the first time in Hino Australia's history that the same two dealers have won the awards in consecutive years.

Both awards were presented by Ken Sekine, Chairman and Chief Executive Officer of Hino Australia and Steve Lotter, President and Chief Operating Officer, at the official gala awards dinner in Sydney on Friday, 12 April.

Steve Lotter said that for Sci-Fleet and Bendigo Truck Centre to back up from last year's win was a remarkable achievement in a year of improved truck sales.

"2012 was an encouraging sales year with a large number of customers returning to the market to replace fleets that were ageing prior to the global downturn," Mr Lotter said.

"With a lot of trucks passing through the national Hino dealer network it's a huge achievement to remain on top for a second year running, and indeed it's the first time it's been done in Hino Australia's history.

"Hino Australia would like to congratulate all of the top achievers from 2012, and we look forward to their ongoing support throughout the rest of 2013 and beyond."

Both Mr Andersson and Mr Elliott acknowledged the hard work and dedication of their staff in winning their awards.

"A dealership is only as strong as the dedicated staff who work hard to make sure the customer experience is the best it can be, so I accept this award on behalf of everyone at Sci-Fleet Hino," Mr Andersson said.

"The quality and versatility of the Hino range make them ideal for just about any application, and innovations like the addition of a ProShift 6 automated manual transmission in 2012 just make them even better for our customers," Mr Elliott said.

The annual Hino dealer of the year awards recognise a number of qualitative and quantitative contributions Australian dealers and their staff make to the success of the Hino franchise each year.

These include sales, service and spare-parts delivery performance, and achieving a number of customer-service oriented criteria set by Hino Australia.

Mr Lotter said the Hino dealer network was well primed for 2013, and set to substantially grow sales across all truck and bus segments throughout the year.

"We're cautiously optimistic for another strong year in 2013, and our dealers' commitment to customer service and delivering on one of Hino's core values of exceeding expectations will help us achieve that."

The presentation took place at Doltone House in Sydney and was attended by staff from dealerships around the country, Hino Australia staff, as well as Yoshio Shirai, President of Hino Motors Ltd Japan and Shin Nakamura, General Manager Asia Oceania Division.