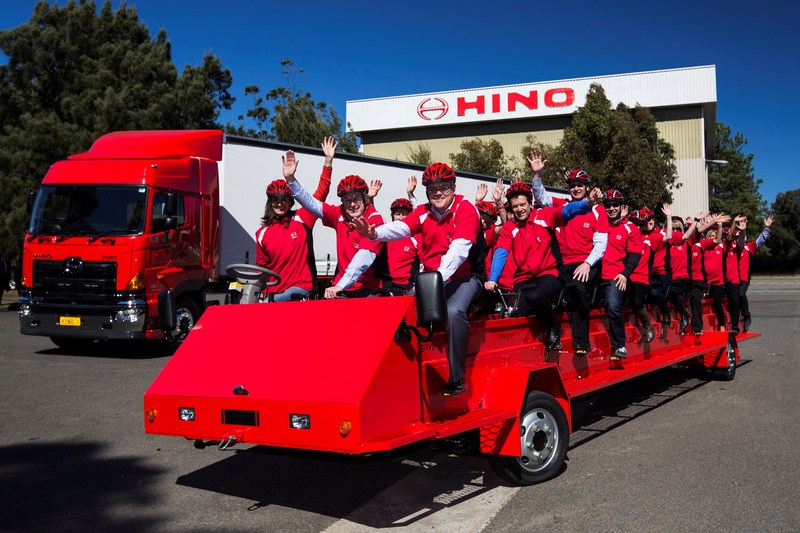 On the launch at Hino HQ on August 24, the bike was unveiled and the keys to the Hino 700 SS were handed over to a St. Vincent's representative. Local politicians and senior executives from other sponsors, including BP and Border Express, were also in attendance.

Hino Australia President and Chief Operating Officer Steve Lotter said Hino was delighted to be able to assist the worthwhile cause in such a practical way.

"St Vincent's Hospital's Heart and Lung program plays a critical role in saving and improving people's lives. As a foundation sponsor of the initiative we're proud to provide the means of transporting the bike around NSW to raise awareness of the work done by the Heart Lung team.

"On a global basis Hino has a strong sense of corporate responsibility, and our partnership with St Vincent's underlines our willingness to be involved in such a worthwhile community-based project."

Professor Michael Feneley, Director of Cardiology and of the Heart Lung Program at St Vincent's Hospital, accepted the keys to the truck on behalf of the institution.

"This is a terrific initiative on the part of Hino," he said. "St Vincent's has long been an international leader in our heart lung endeavours and it is wonderful to have the support of Hino and other leaders in the transport industry for such an important health initiative."

St Vincent's Hospital will officially launch the Big Red Bike project in October, and the bike and Hino will tour regional NSW throughout 2013.