Hino's eye-grabbing Poncho is set to prove that size really does matter when the diminutive mini-bus makes its public debut at next week's Australian Bus and Coach Show in Sydney.

The new-to-Australia Poncho will feature prominently on the Hino stand, alongside its larger stablemates, the Melpha and FD240. Both the Poncho and Melpha are being evaluated for their suitability to the local market.

Poncho
Measuring less than seven metres from end to end and little more than two metres across, the Poncho's exterior dimensions and 6.4-metre turning circle make it well-suited to manoeuvring through congested cities.

Despite its compact exterior dimensions, clever use of internal space means it can carry up to 18 seated passengers and a further 10 comfortably in the aisle.

"Its long wheelbase and short overhangs are an ideal basis for a low-floor, nimble bus that doesn't sacrifice stability or passenger comfort in the name of manoeuvrability," said Hino Australia National Sales Manager, Kevin Fielding.

"We see this as a community transport option that is ideal for retirement communities and as a rural-route bus, as well as ex-services and sporting clubs."

The Poncho on display at the Australian Bus and Coach show is powered by Hino's Euro 5-compliant JO5D four-cylinder engine, capable of 177 horsepower and 530Nm.

The Poncho's turbo-intercooled, common-rail injected 4.7-litre engine channels its power to the rear axle via Aisin's proven five-speed automatic transmission, which - along with the front axle - can be raised or lowered by 50 millimetres for easy access.

With hybrid and full-electric models already operating in Japan, there's scope for a wide Poncho range.

At nearly nine metres long and 2.4 metres wide, the Melpha dwarfs the Poncho, but the big Hino's turning circle is still a respectable 7.4 metres thanks to a 4.5-metre wheelbase.

Also on Show
Rounding out the Hino stand at the Australian Bus and Coach Show will be a brand-new FD240 bus chassis, fitted with a P & D Coachworks 45-seat body.

The P & D body comprises lightweight fibreglass and aluminium panels over a tough galvanised steel frame. Together with the proven toughness of the FD240 chassis, the bus is well-equipped to deliver years of service.

The Australian Bus and Coach Show runs from September 25 to 26 at Sydney Olympic Park, Homebush. 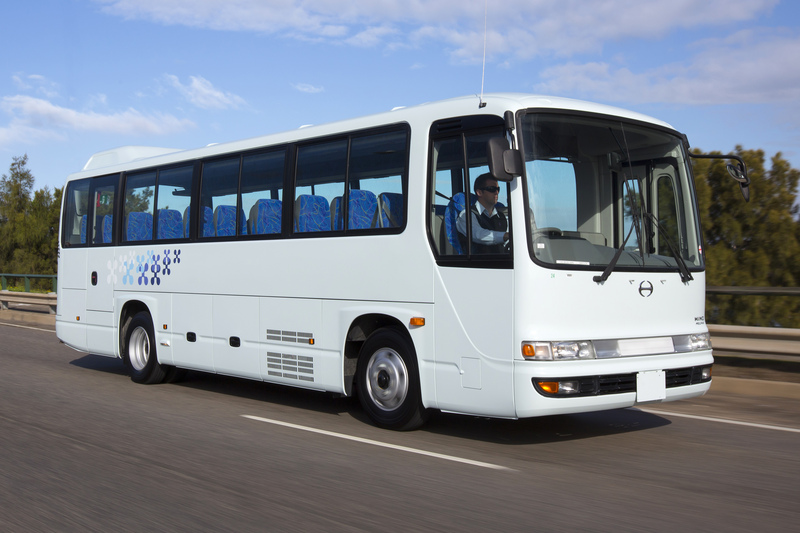