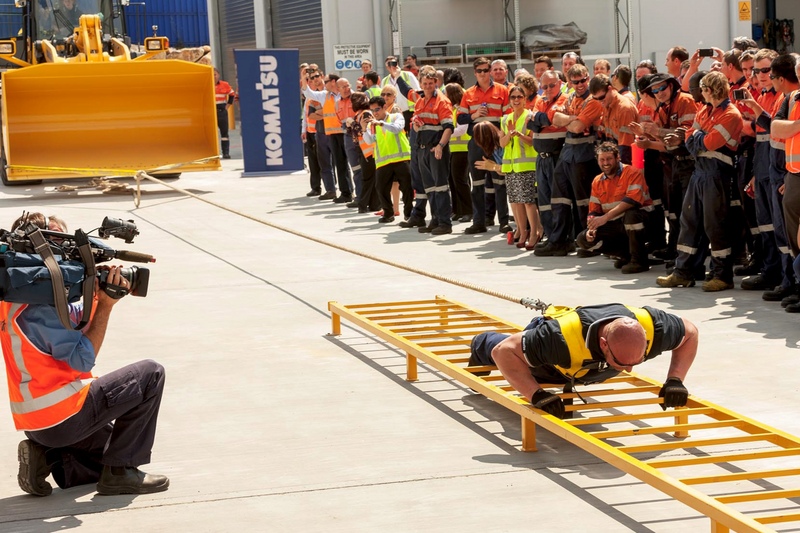 Le Roux, who's a Komatsu employee, towed a WA480 wheel loader six metres along the Wacol branch driveway
Eben Le Roux, Australia's only entrant for the upcoming World's Strongest Man competition in Los Angeles, has warmed up by moving some very heavy equipment at Komatsu's Queensland facility in Wacol.

Le Roux, who's a Komatsu employee, towed a WA480 wheel loader six metres along the Wacol branch driveway. His only help came from a rope tied to the wheel loader, a ladder attached to the ground to aid with footing, and the cheers from his colleagues.

Even though the Komatsu WA480 wheel loader weighs in at over 30 tonnes, Le Roux dragged the loader along easily. Considering he's pulled an 80-tonne truck in the past, this task was a doddle! When it's not operating on "man power", the WA480 runs on an 11-litre 224-kilowatt diesel engine.

Le Roux, who works as a fitter at Komatsu's Wacol facility, uses a 90kg dumbbell to keep in shape at home, and is able to dead-lift up to 400kg on a barbell. He has been lifting at a competitive level for around four years and now competes in tournaments on a yearly basis.

Komatsu Australia Regional General Manager for Queensland, Dean Gaedtke, said Komatsu was proud of the individual achievements of Mr Le Roux and is keen to offer support in the achievement of his personal goals.

"We're glad that Eben can use machinery from his workplace to warm up for the World's Strongest Man competition," said Mr Gaedtke. "This event was a lot of fun, and everybody enjoyed seeing Eben in action. We're wishing him all the best for success in Los Angeles."

The 2012 World's Strongest Man competition will be held from September 24 at the Commerce Casino in Los Angeles, with the finals scheduled for September 30 and October 1.