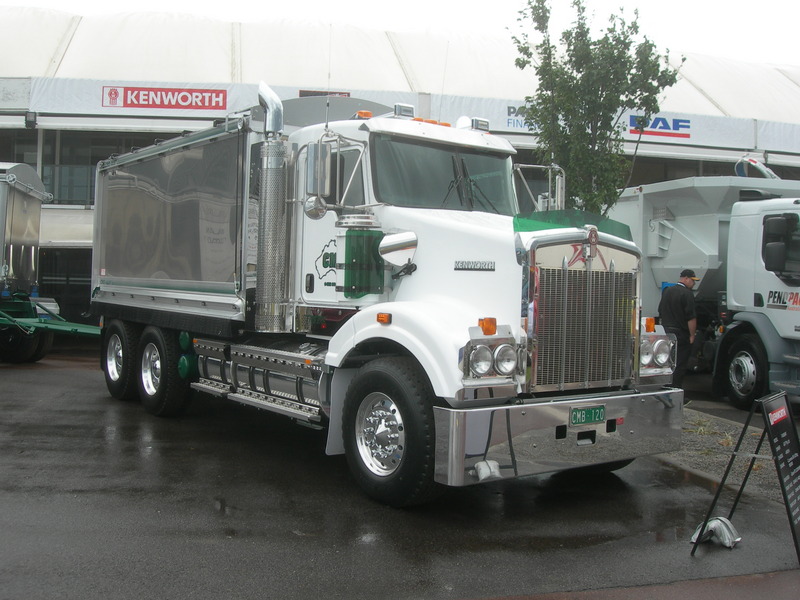 Fifteen best-selling Kenworth and DAF prime movers and rigids were displayed at one of ITTES' largest exhibits. The centrepiece of the display was DAF's new flagship, the XF105. This award-winning truck has already become one of the most popular trucks across Europe, and after extensive testing in Australia, it has proven itself as a sturdy workhorse capable of handling a variety of long-distance applications. In addition to displaying two XF105s, DAF also had on show three other trucks from their medium and heavy duty model range.

PACCAR Australia's Director, Sales and Marketing, Andrew Hadjikakou, said,
"We presented iconic Kenworth and DAF models in a wide variety of configurations and specifications. We want to show the industry that PACCAR offers the total package - a complete range of quality, safe and efficient road transport solutions, which draw on the best local and international expertise, and can be customised for Australian conditions and individual requirements."

"It delivers a powerful, economical truck with a spacious, well-appointed cab. It's highly manoeuvrable in the city and a pleasure to drive, even on long hauls and harsh conditions."

The XF105 is well suited for various demanding applications, such as tanker operations, and interstate distribution.

DAF has modified the vehicle to better manage Australia's unique operations and taxing environments. It is equipped with a PACCAR MX engine and a robust cooling package, with higher capacities for handling hotter conditions. It is also fitted with Kenworth's Australian-developed Airglide rear suspension and Meritor axles for long-distance haulage with heavier weights.

The flagship DAF is powered by a high-performance, fuel-efficient PACCAR MX engine with 510 hp, and ample torque of 1845 ft/lb. The 12.9-litre, six cylinder, turbo-intercooled engine incorporates SCR technology to meet the Euro 5 and ADR80/03 emission standards.

The XF105 has a smooth 16-speed AS-Tronic automated transmission for ease of operation. An 18-speed Eaton Roadranger manual transmission is also available as an option. The vehicle can also be configured with an integrated engine brake for enhanced stopping power.

The XF105 comes standard with a range of safety and comfort features, including Electronic Braking System (EBS), Anti Slip Control (ASR), and Hillholder (in combination with the AS-Tronic gearbox).

In addition, there are a variety of optional features. These include Adaptive Cruise Control (ACC), Forward Collision Warning (FCW), Lane Departure Warning System (LDWS), airbag in combination with seatbelt pre-tensioners, and a DAF Camera System, which makes driving safer, especially during tight manoeuvres.
The XF105 boasts an ergonomically designed, spacious and luxurious cab. It features a fully appointed, curved cockpit-style dash, instrument panel and adjustable steering wheel. It also has logically-positioned handles and switches, numerous storage facilities and room for various modern conveniences, including a fridge.

The XF105 is available with a choice of two sleeper cabs, both with plenty of room including two bunks.

DAF exhibited two XF105s at the Melbourne exhibition, both of which were configured as 6x4 FTT prime movers powered by the top-of-the-range PACCAR MX engine, mated with the 16-speed ZF AS Tronic 16AS2630 automated transmission, as well as an integrated MX engine brake, disc brakes on the front axle and drum brakes on the rear and Meritor MT23 (2 x 8500 kg) rear axles riding on Airglide 400 eight-bag air suspension. In addition, each vehicle will have ACC, plus various safety features, including ABS, EBS and LDWS.

What differentiated the two display trucks were their sleeper cabs. One being fitted with a two-bunk Space Cab, and the other with the Super Space Cab, the most roomy in its class.
The XF105 was available for immediate delivery, following the exhibition.

In addition to the XF105s, DAF had three other trucks on display in different configurations and specifications. All were powered by high-performance, fuel-efficient PACCAR engines which comply with Euro 5 standards. In addition, each vehicle was fitted with cruise control, ABS, EBS and LDWS, with the exception of the LF55 (it had cruise control and ABS).

On display was the FTT CF85 6x4 prime mover. Suitable for a range of intrastate distribution applications, it provides the pulling power of higher hp units (with torque levels up to 1,695 ft/lb) with lower fuel consumption. The display vehicle featured a PACCAR MX engine, rated to 460 hp, a 12-speed ZF AS Tronic 12AS2330 automated transmission as well as a Space Cab.

Also on show were the FAP LF55 and FAP CF75, both having been specially configured as 6x2 air lift pusher axle trucks. The extra lift axle enables a truck to be more flexible, by making it more cost effective and efficient to carry various payloads.

"The air lift pusher axle is positioned in front of the driven, rear axle; as opposed to the conventional, trailing 'lazy' axle which is behind the rear axle," Stephen explained.

"The forward rear pusher axle can be lifted off the ground whenever the truck is carrying light or empty loads, which reduces fuel consumption, maintenance costs and tyre wear. Conversely, employing the pusher axle provides a truck carrying heavier loads with a greater distribution of weight over more wheels as well as better traction and handling," he said.

The FAP CF75 is a versatile vehicle with low tare weight and a fuel-efficient but powerful engine. This makes it ideal for a variety of urban and regional distribution. The truck on show was presented with a rigid body fitted with curtain-siders. In addition, the vehicle had a 360 hp PACCAR PR engine, a 12-speed ZF AS Tronic 12AS1630 automated transmission and a Space Cab.

The light-duty FAP LF55 as a 6x2 rigid, incorporating the pusher axle, is compact, lightweight, economical and highly manoeuvrable, making it well suited to urban distribution and specialist applications, such as waste collection. The display vehicle was configured with a rigid body with curtain-siders. The truck featured a 210 hp PACCAR GR engine, a nine-speed Eaton 9S8309 synchromesh transmission and a sleeper cab.

Not only providing trucks PACCAR Parts is Australia's leading aftermarket truck parts and accessories provider. Completing the display of two class leading brands, PACCAR Parts All Rig display showcased some of the more popular and interesting truck parts, trailer parts and winches to complement the brands. 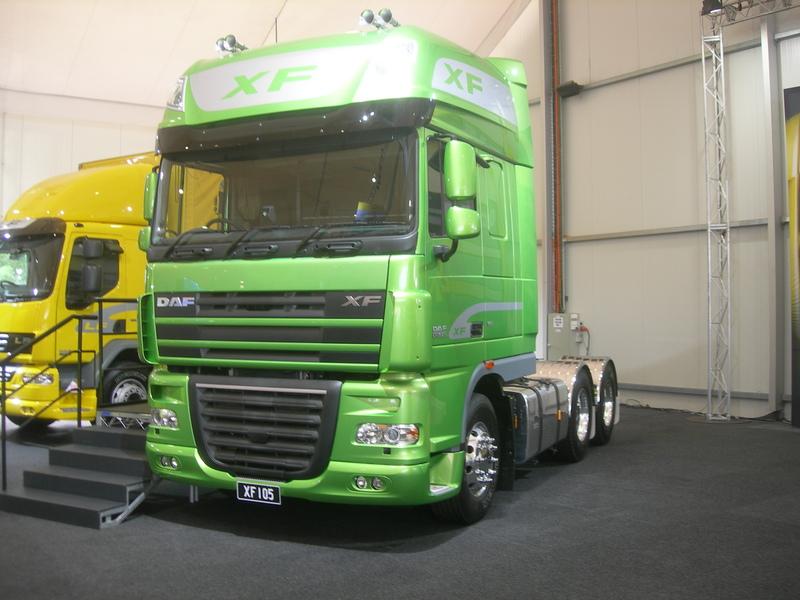 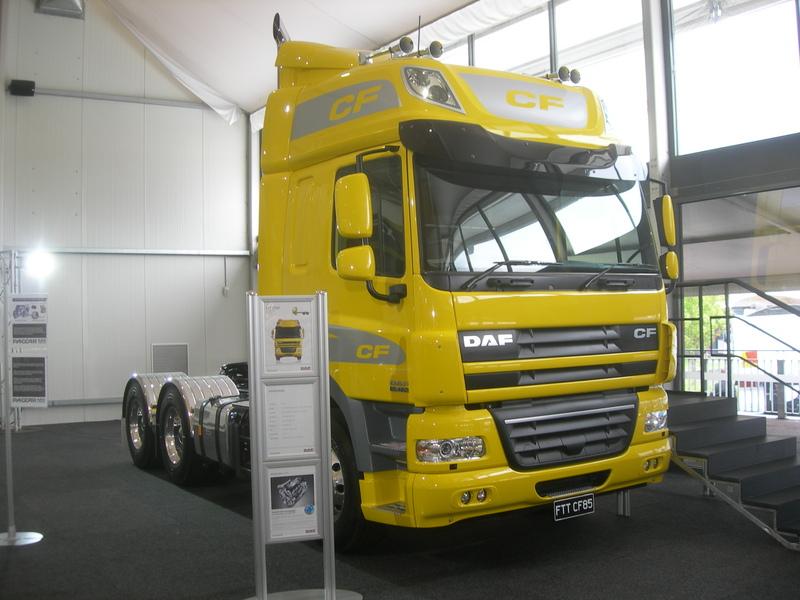